This plugin lets you create and load maps by putting blocks outside of the intended building area.

How does it work?

This plugin works by increasing the environment's decoration size.

To create a new map with a bigger map size, you have to be inside of a titlepack's menu first. Then, in the Openplanet overlay, click on Scripts -> Create a new map...

This will give you a dialog where you can set some properties: 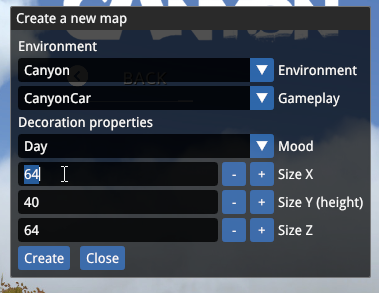 Pick your settings, change the size, and hit Create.

Once you save your map, you can load it like you would any other map and the decoration size will also be saved.

Page updated 2 years ago by Miss