During the setup, you will be asked to locate your install path for Trackmania. Make sure you enter the exact directory where Trackmania.exe resides. (If you're installing the Maniaplanet version of Openplanet, you're looking for ManiaPlanet.exe, and for the Turbo version it's TrackManiaTurbo.exe.)

Careful if you've installed Trackmania through Epic Games, as it may have installed the game twice!
Openplanet needs to be installed in the same directory as the game you're actually running. You can double-check where the used Trackmania instance is located: Once Trackmania is started, open the task manager, right-click Trackmania.exe and select to open its file location. 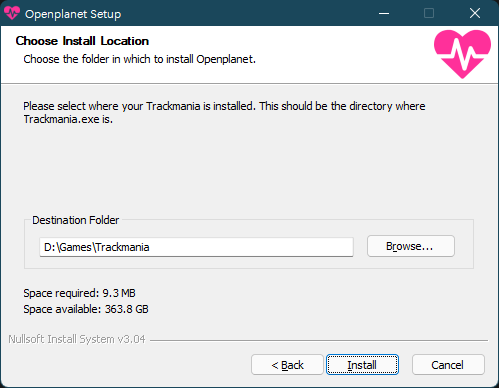 Run into antivirus findings or Windows Defender warnings about Openplanet? Don't worry, Openplanet is safe to install and use!

Some antivirus software can flag applications because they haven't seen the software before, or when they hook into other processes (like Openplanet does). Additionally, Windows Defender doesn't like that Openplanet's installer isn't code-signed, but that doesn't make the application insecure, Windows just warns you about it. (Code-signing is way too expensive for us unfortunately.)

If you see a SmartScreen error, you might have to click on More info -> Run anyway to run the installer. If you don't see that button, right click the installer in Explorer, click Properties, and check "Unblock" at the bottom.

Once installed, simply start Trackmania like normal, and you should see "Press F3 for Openplanet menu" in the top-left corner. If the overlay doesn't work, check out the troubleshooting guide.

Next: Using the Openplanet overlay


Page updated 3 days ago by tooInfinite